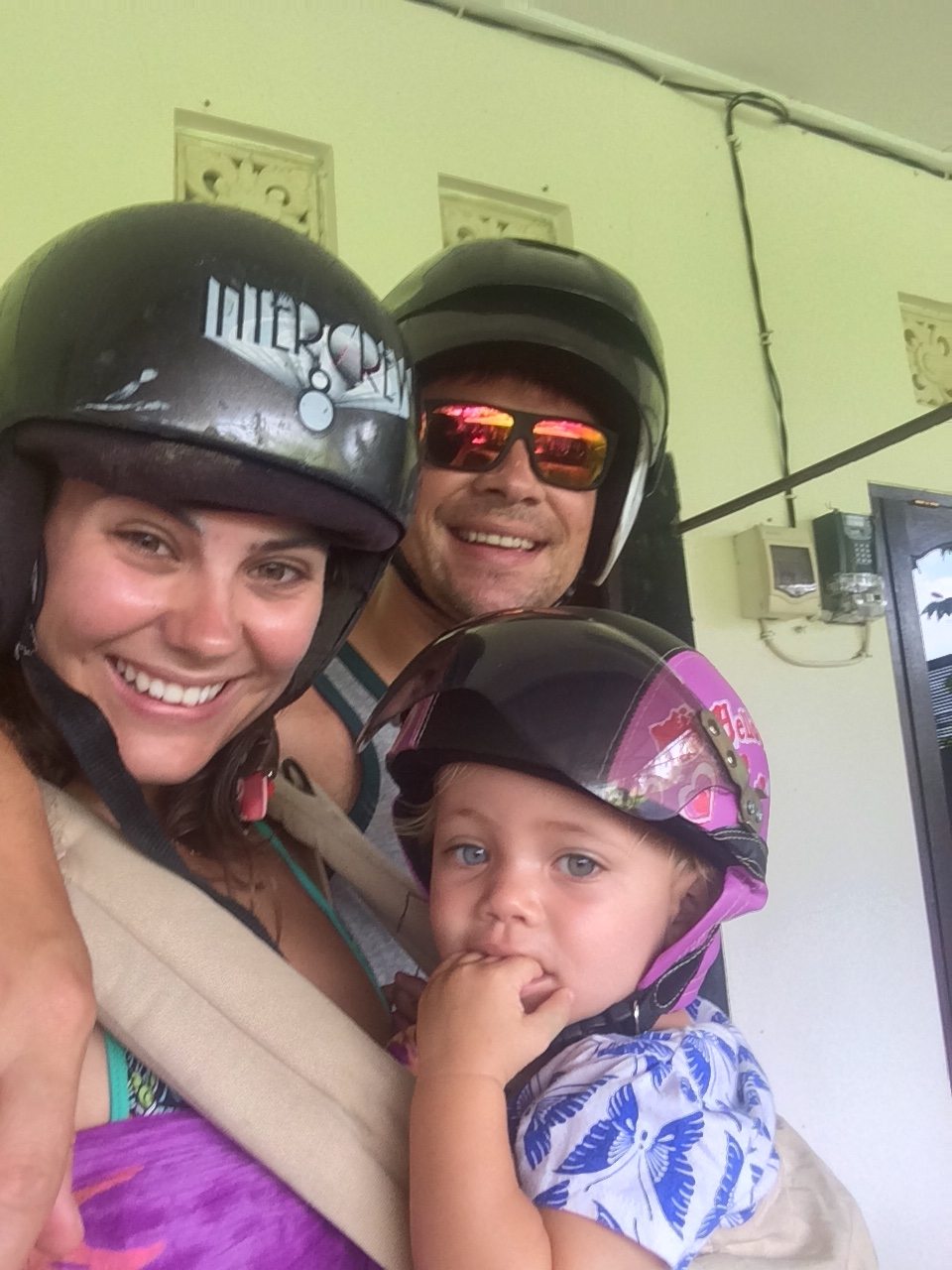 in Food for Freya, Travel

Canggu, Bali is an amazing place, but I feel like it’s going through a bit of an identity crisis right now. As with most places in which flocks of Westerners turn into destinations, some of those Westerners stay… then more stay, and then you have people opening coffee shops that could easily pass for any coffee shop in San Diego. But the coffee shops in Canggu have rice fields and Hindu temples for neighbors, and have geckos roaming the walls. It’s also very easy to get Western food here. Pizza. Burrito. Burger. You name it, you can probably find it fairly close. These types of foods will usually cost between $4.00 to $6.50. Not bad. But, I go for the Indonesian food next door to the Western restaurants, where an entire meal runs about $1.00 to $2.00. 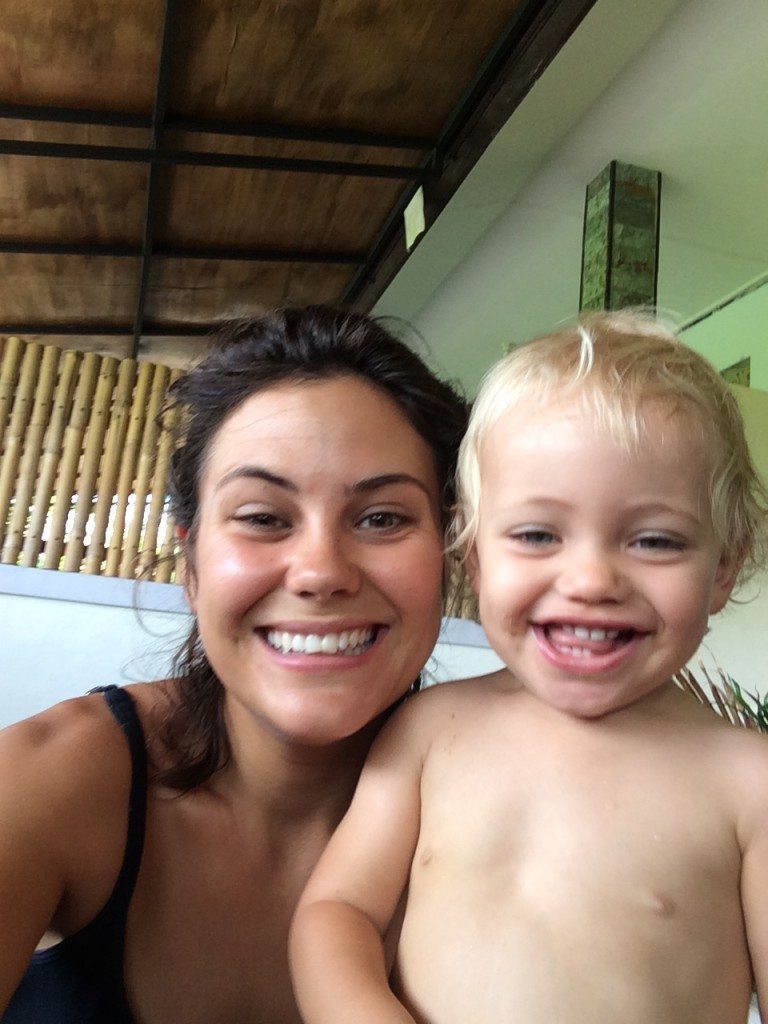 We’re just hanging out on the porch during the hottest parts of the day to avoid the sun. We head out to the beach in the mornings and evenings.

For all the Western influence here, Canggu is still not as developed as the areas just East of us in Bali, like Seminyak, Kuta, Depensar, etc. Those are proper cities. I mean, they have McDonald’s and KFC. That’s my ‘city’ definition. Canggu still has it’s Indo charm, no matter how hard Google tries to map it out. See below… this is an actual road on Google maps. I couldn’t believe it. 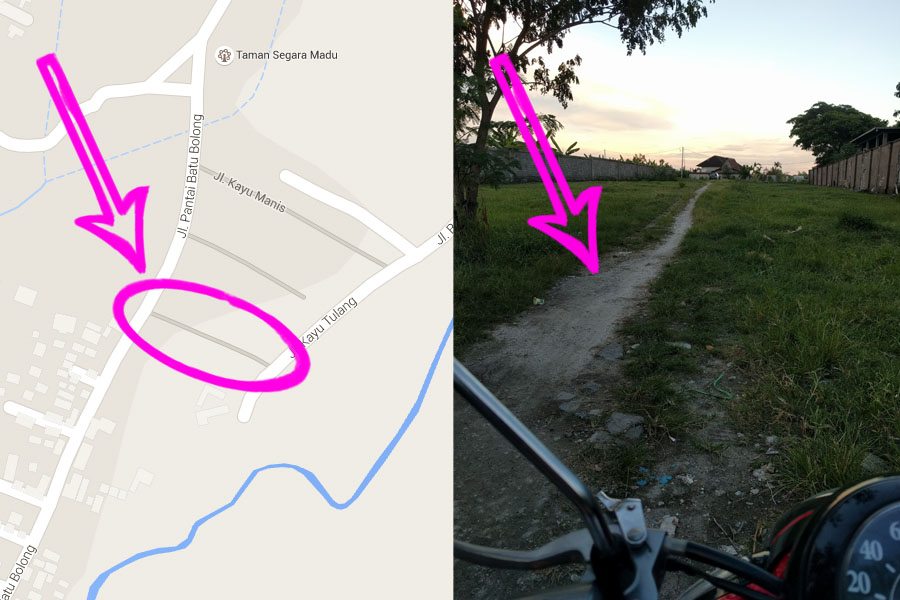 Beware of Google Maps leading you down single track walking paths through cow pastures in Canggu, Bali. This is a turn we actually took!

Anyway, it’s very easy to settle into Canggu life because there is so much of home here. We’ve had a homemade taco night and chicken nuggets night… it feels homie. It also makes it easier since we’re staying in one spot for a month. Rather than the ‘1 week here’ and ‘3 days there’ people that you meet while traveling, staying in a place for a month gives you a chance to plant some roots (although very tiny roots that will be torn out of the ground in a short while). 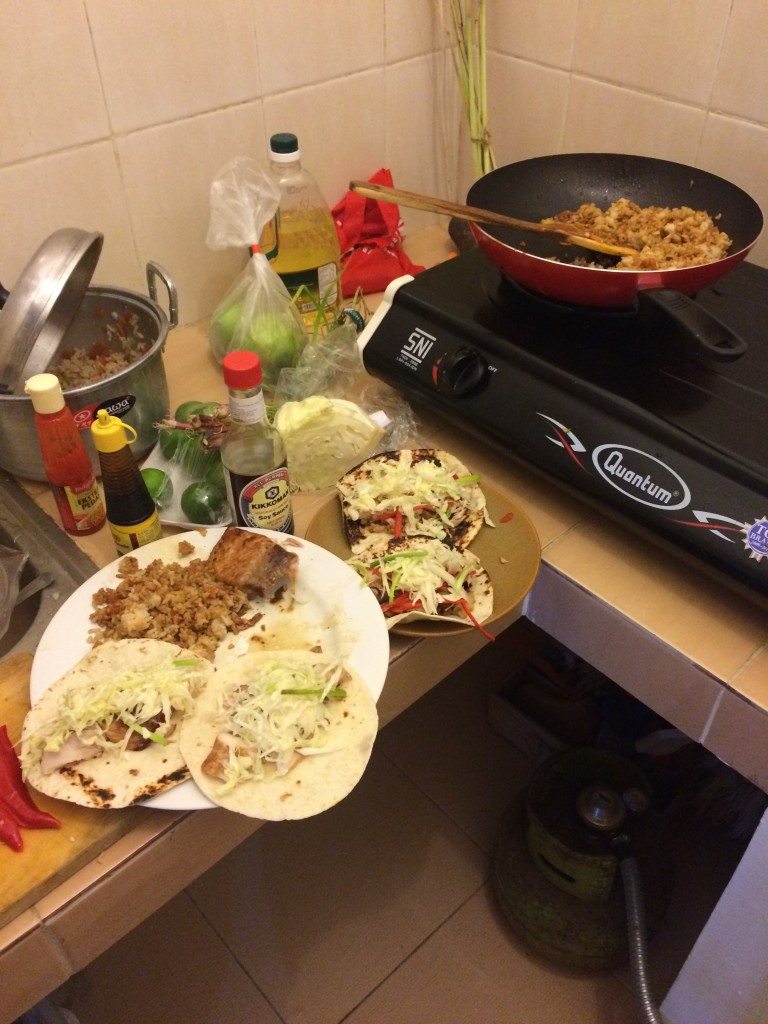 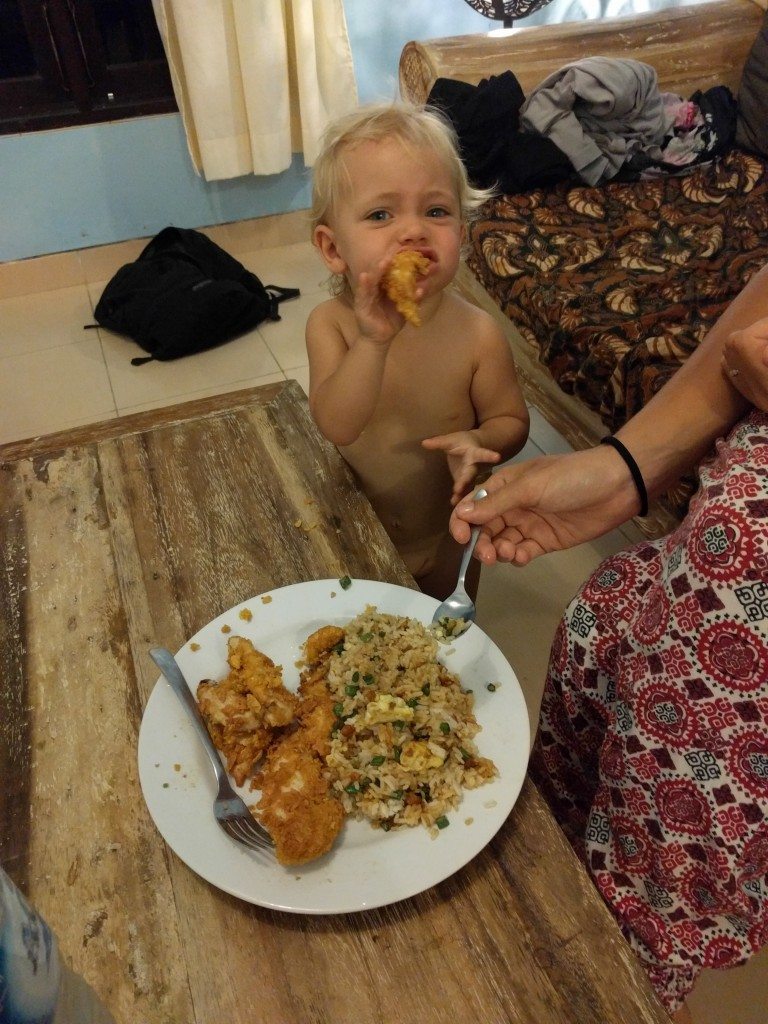 Freya munchin’ on homemade chicken nuggets. We had chicken, eggs, and corn flakes. I could have used a few more ingredients, but they turned out pretty darn good.

We have been able to establish some sort of routine, which is especially nice for Freya. She loves going to the local kindergarten at 10:00am when the children get out of school. She plays with the kids, and they all want to touch her, hug her, etc. It’s super cute. Freya has also gotten pretty fond of the moped. At times she will go out to the porch and grab her helmet (puts it on backwards) and her shoes, and then point to the moped. So freakin’ cute. We thought that we would never even take her on a moped, let alone rent one for a month… ‘when in Bali…’ 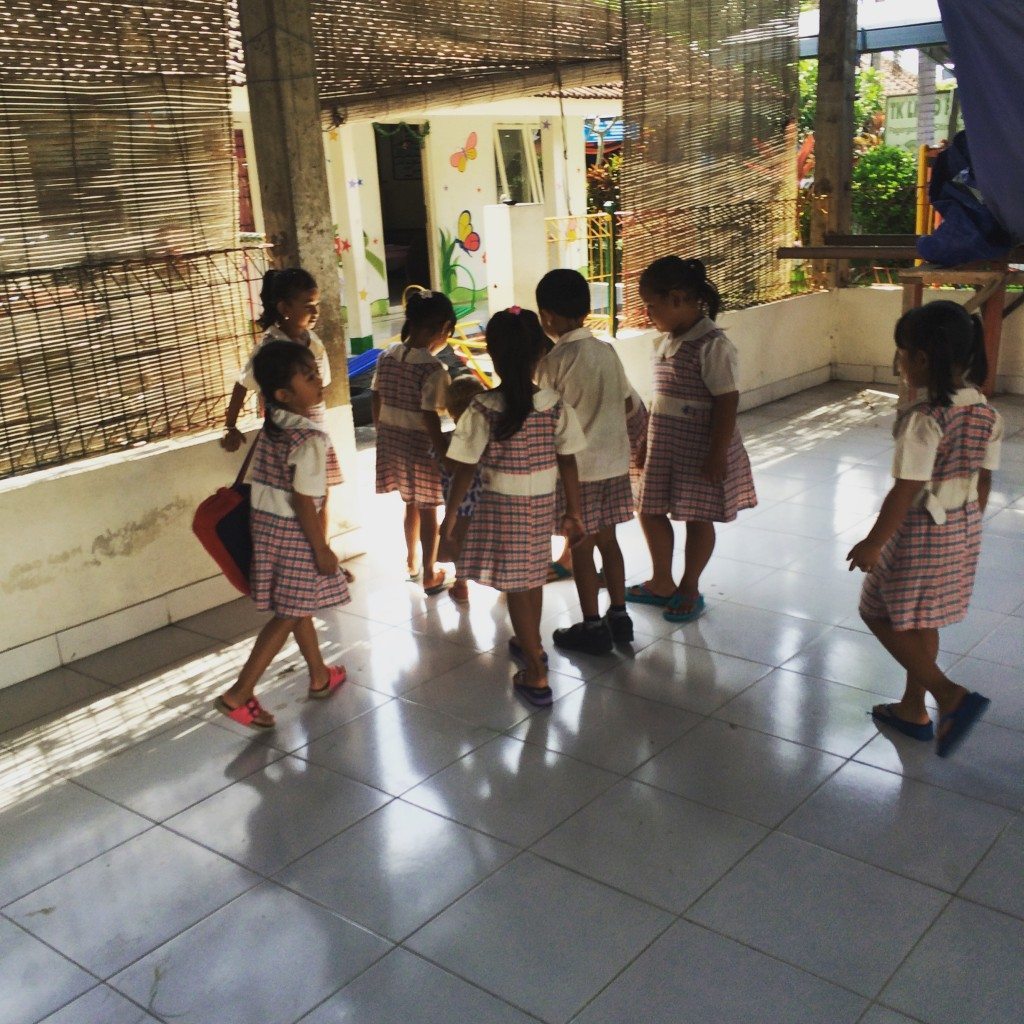 This is Freya getting lost amongst the kids that want to play with her at the local kindergarten. We take Freya there at 10:00am when the kids get out of school. 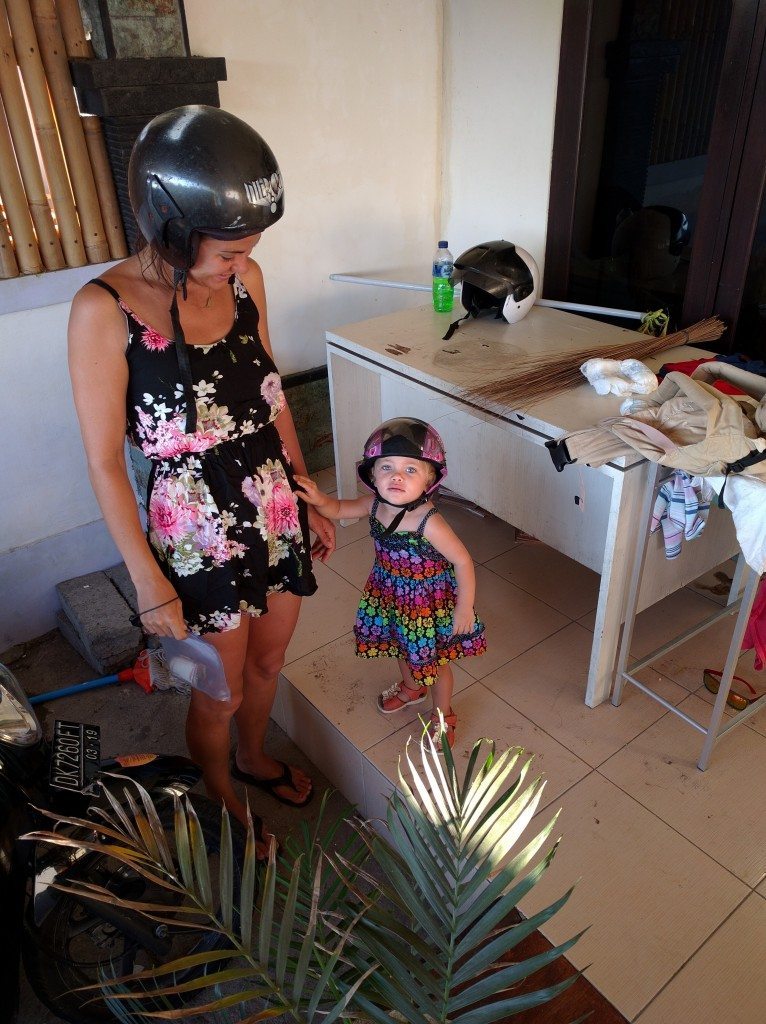 Freya is all set to go with her helmet on. Just waiting on me to take the picture, then we’re off on another moped ride.